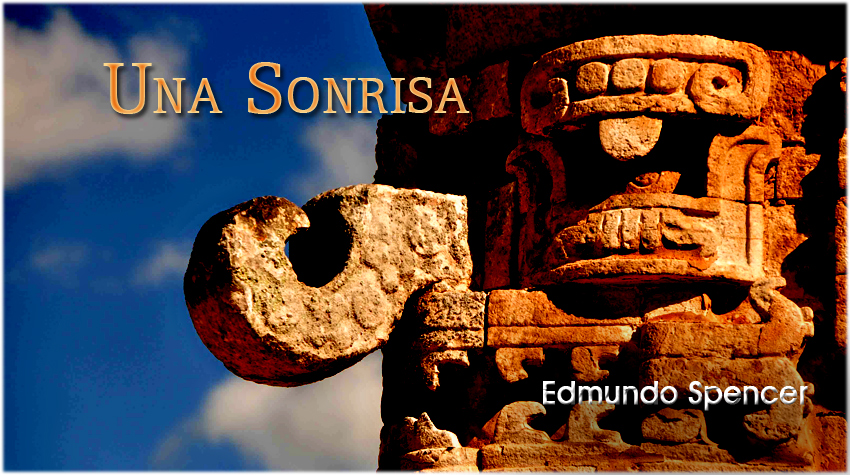 On that first visit, Roberto spoke with him—

A sincere smile is priceless.

WARNINGS RAINED upon her like a deluge. Her father, her intimate friends, and also those not too intimate, warned her, but she didn’t put attention; Angelica was hopelessly in love with the wrong man, and there was no way to make her re-consider her decision to marry him. Now, after being a cheerful and happy girl, it seems like if she were a synonym of disappointment because, at only twenty-three years old, she had decided that she wouldn’t never ever marry again. She married at twenty one in a beautiful May morning and her happiness lasted, you could say, what the crowing of a rooster lasts; because at twenty tree and two months, she was already a divorced woman. The sky fell upon her when she found out that her husband was cheating on her. -You men are all alike, – Angelica constantly repeated, – I never ever will trust anyone of them. It was in moments like this that her father, Don Javier would reprove her in a very kind way telling her that she shouldn’t be unfair, that she shouldn’t measure all men with the same measuring tape; – I always respected your mother, never cheated on her. Angelica, respectfully and from the deepness of her heart, apologized. She held her father in great respect; for her, her father was the model husband, and an example to follow. Even when Angelica’s mother was not in this world any more, Don Javier kept being faithful to her, he never married again. Wrong or right, he always thought that in this world, there was not a woman capable of filling up the emptiness that his beloved wife left in his soul when she died. Still; Angelica in her frustration, was doubtful; – is it true that he always was faithful to my mama?

It was normal, of course, that Don Javier was worried because of the situation in which his beloved daughter was, but not to the point that he would suspect the she would do something crazy. He knew her very well; he knew she was a very smart girl, with a firm character, and great morality. He was pretty sure that Angelica’s decision was not definitive. Angelica was very hurt, frustrated, and disillusioned. – Time is the best medicine, – Don Javier thought, – all you need is patience, she will fall in love again, and I am sure she will be more careful; her selection will be meticulous, and intelligent.

-Look my dear daughter, – Don Javier said one of those days, – you know the saying that says that “every cloud has a silver lining,” maybe the future has something for you that will make you change your mind; it’s just a matter of patience. I’m going to give you some advice, excellent advice, I should say: Try not to fall in love with “the love”, don’t fall in love with a “beautiful face”, and fall in love with the person rather; that is very important.

When Don Javier talked to her, Angelica looked at him straight to his eyes. She was brought up that way, and that is right; that’s what a respectful and well-mannered person does: Listen attentively. However, Angelica’s wound was very deep and painful. On nights, in her room, she’d shed tears till she felt asleep. Don Javier was aware of that because he could hear her sobs, and that is why, in a smart way, he always tried to force the conversation with Angelica. He wouldn’t let her fall into a deep depression. He never straightforwardly told her, “talk to me, or tell me what’s going on,” he would rather lead the conversation in a way that Angelica would freely talk about her feelings.

From being a happy and cheerful girl, Angelica came to be a taciturn and introverted girl. Her performance at the lawyers firm where she was working as a legal assistant was like if she was on automation.  Communication with her boss and co-workers was limited just on things related to the work. Her co-workers tried unsuccessfully to cheer her up with jokes and jests but nothing worked. Angelica’s mood had changed radically, a half smile here or there, and that was it. Then, a good man by the name of Roberto Garcia, appeared in Angelica’s life scenery. How could she imagine the events that at long steps were approaching her?

Roberto Garcia decided, because of his emotional situation, that it was absolutely necessary to get out of the city where he was born, where he grew up, where he had a grocery store, where he got married, and six years after that, he became a young widower with a seven years old son to whom he decided to devote the rest of his life. With that purpose in mind, Roberto sold everything he had in his home town, and moved to Don Javier and Angelica’s home town. Maybe it was by sheer chance, or by work of the providence that he rented a small house that was located in one of the corners of the same block where Angelica and Don Javier lived. And by the same sidewalk, in the other corner, bought a building that for some reason, the construction was not finished. So, he decided to finish the construction to install his grocery business. It was because of this circumstance that Roberto and his son walked, every evening by Angelica’s house. Usually, Don Javier set in his rocking chair every evening outside of the house under the porch, just to see the people passing by. Every once in a while, a neighbor stopped to talk. One of those days, Roberto decided, along with Bobby (his son) to introduce himself to Don Javier. And even when at that moment Roberto’s intention was merely business, (public relations) that was the beginning of a beautiful friendship that lasted for many years.

The value of a sincere smile is priceless.

On that first visit, Roberto talked to Don Javier extensively about his grocery business plan. And after that, and in subsequent visits, friendship between them grew in a way that they not only talked about business, but personal things as well. So, Roberto filling an almost urgent necessity to diminish, at least a little bit his pain, told Don Javier, and indirectly (since most of the times she was there) to Angelica about how he lost his wife because of leukemia; how himself and his son were trying desperately no to fall in deep sadness, and how both hoped to start a new life. Angelica, even when her participation in those conversations was sporadic, in a way, she was sympathetic to Roberto and Bobby, since she was in similar situation.

One those conversations there was something that exceedingly called Angelica’s attention: Bobby’s very well behavior; always there, closed to his father, and very quiet. But that was not all, besides the fact that she already had noticed that Bobby was a very sad child, there was something else that filled her with uncertainty: – Why Bobby stares at me so much? Asked herself in her mind. It was not that Angelica had caught Bobby staring at her. (Bobby was real careful not to be caught in the act) The thing was that she could “feel” that insistent staring, and tried by any means to catch him looking at her. It was not an easy task, but finally she got him. It happened on of those evenings in which for some reason, the conversation between Roberto and Don Javier stopped for a few seconds. Angelica suddenly turned to see Bobby, and she got him staring at her. Bobby timidly smiled, and shyly lowered his head. That timid smile definitely demolished the wall that Angelica had constructed against men.

– That is the most pure, the most clean, and crystal-clear smile that has been given to me, – Angelica thought, and decided (with Roberto’s consent of course) to talk to Bobby more privately, and invited him to get into the house. From her personal library took out a book, handed it to Bobby, and asked him to read the title. – Heart, a diary of a child by Edmundo de Amicis, – read Bobby, fluently. That event told Angelica that Bobby’s father necessarily had to be a good man since it was evident that he had taken the time to teach his son how to read, even when Bobby hadn’t reach the school age. Then, she was greatly surprised when she asked Bobby about his insistent staring. Bobby lowered his sight to the floor, kept quiet for a few seconds, and then, in voice choked with emotion, and with his eyes full of tears like if he were on the verge of crying out loudly, said: – you…look…a lot…like…my mama. – Angelica tenderly hugged him with her eyes full of tears as well, and in that moment, she promised to herself that she was going to do whatever she could to be the mother that Bobby so much needed.

On the other hand, Don Javier looked with pleasure Angelica’s change. He already knew what was going on, but patiently waited that his daughter, of her own initiative, would tell him the reason of her change. Don Javier didn’t have to wait too long. Being by themselves at the table, and after a good supper, Angelica wanted to know Don Javier’s opinion about Roberto. – He is the son I would like to have, – was his answer. Since the conversation took that direction, subtly asked for the motive of her change. Angelica told him what happened the day she invited Bobby into the house; she told him that Bobby could read because his father had taught him, and that Bobby told her almost crying that she looks a lot like his mother, and that for her, all that was indicative that Roberto was a good man. However; intentionally, she didn’t tell him the real reason of her change. – I’ll give them a surprise, Angelica thought. Don Javier, intelligently saw in her eyes that there was something else, but as was his way, he respected the silence of his beloved daughter.

Now Don Javier was pretty sure that Angelica was seriously taking his advice. Roberto was not a very good-looking man; but, he was no that ugly either. He was just a very correct and respectful person. So, when Roberto asked permission to court Angelica, Don Javier didn’t make any objection. After a very correct dating that lasted a few months, and after having finished the construction and with the grocery business already in progress, they got married. In the wedding reception Angelica, radiating happiness, thought that it was the right time to surprise, not only her father, but Roberto and the wedding guests as well. But above all, to Bobby, who, from that moment, became her son. So, she called the attention from every body, called Bobby to stand on her side and hugged him tenderly the way she did few months ago. Her speech was short, but significant:

– All this happiness, all this joy, and the delight that I’m enjoying today, was motivated and had its beginning in a marvelous present that I was given few months ago: a pure, clean, and crystal-clear smile given to me by Bobby.