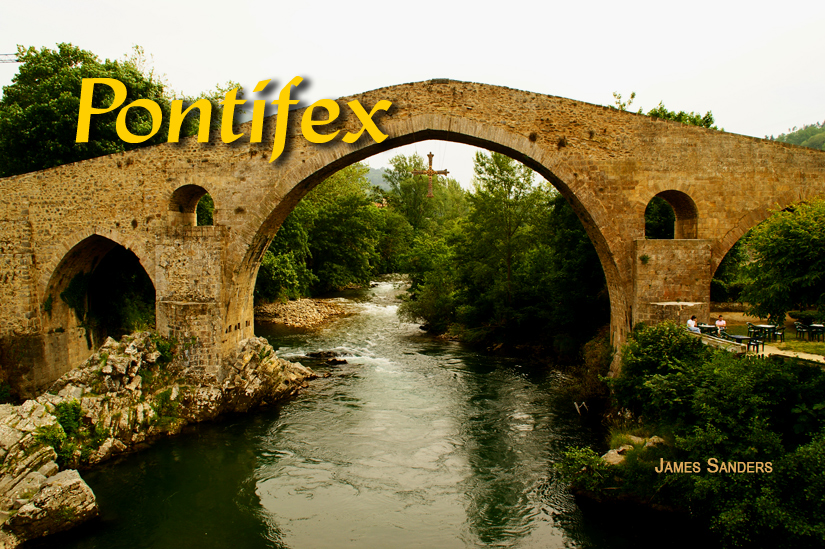 With inviolate curve, forsake our eyes

As apparitional as sails —

PONTIFEX is the Latin word for priest, but the word also means bridge-builder. At least, that is the meaning proffered by Dionysius of Halicarnassus as well as Varro, though Plutarch argued differently. Yet, pontifex as bridge-builder seems to have been what the ancients understood as the basic meaning of the word.

Indeed, in ancient Rome during the reign of Ancus Marcius, the first bridge to be built across the Tiber River was as much a religious shrine as it was a structure. The bridge was called the Pons Sublicius and was built entirely of wood with metal being religiously forbidden in its construction. The word, pons, of course, means bridge, and the adjective sublicius means resting on wooden piles. The name, then, seems to have reflected the actual construction. The bridge, of course, had to be rebuilt a number of times through the centuries since it was made of wood, but as a structure and symbol, the Pons Sublicius remained a part of Rome for a thousand years. The pontifices or priests had the responsibility of maintaining this particular bridge (and perhaps, others as well). These priests, then, functioned as bridge builders in a very real sense.

The Pons Sublicius was also the site of a fierce battle. Vastly outnumbered, the Romans were driven back by an Etruscan force who threaten to cross the bridge and enter Rome itself. The enemy attack, though, was held at bay by three Roman officers— Lartius, Herminius, and Pulicus Horatius. According to Livy, the Roman force had retreated in panic, but the bridge was secured by three brave men.

Horatius, however, was the last Roman on the Pons Sublicius. Although severely wounded, he was able to slow the attack.  Once a portion of the bridge had been dismantled, thwarting the enemy’s access to the city, Horatius leaped from the bridge into the river and swam to safety under a flurry of enemy spears. Livy says that the Etruscans were amazed at such boldness, valor, and daring—

They hesitated for a moment. Then shame made them attack, and with a shout they cast their javelins from every side against their solitary foe. But he caught them all upon his shield, and, resolute as ever, bestrode the bridge and held his ground —Ab Urbe Condita 2:6, 10

This stance by Horatius became one of the great moments in all of Roman history, and a source of inspiration for every Roman soldier.  What had once been a religious site had now become a historical monument as well. 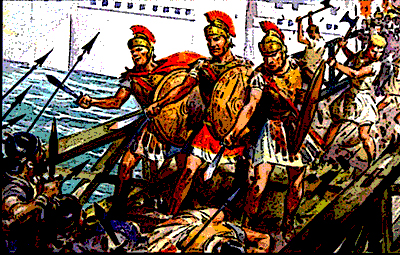 A little further downstream was another bridge, a stone bridge— the Pons Aemilius. However, this bridge, even though initially made of wood, was never a religious site or relic.  To be sure, this bridge, too, had its story, but nothing to match the story of its counterpart, the small wooden bridge upstream.

A bridge is as much an experience as it is structure. Indeed. bridges are but patterns of arches and curves, suspended in mid-air, linking the beginning of a journey with the end of that journey. As we cross a bridge, we cross a ravine or river below, and our very perspective of life changes abruptly and especially so when the bridge is an arch so large that we cannot see to the other side. In the words of Hart Crane, the bridge is an inviolate curve and forsakes our eyes; across its span we vanish as a ghost unleashed into the wind like sails on a ship.  We can only look up to where the bridge leads, and then, once again look down to where the bridge and our journey end. In some ways, the bridge is like life, suspended between two spheres of God. Ecclesiastes offers this insight about the moment we breath our last and leave this world,

Then shall the dust return to the earth as it was: and the spirit shall return unto God who gave it —Ecclesiastes 12:7

A part of us stays here on this side of an invisible bridge; another part of us returns over that unseen bridge to God who gave us our spirit. We mysteriously come into this world from another world, and when our life has ended, we return to another world.

Christ referred to his own death in a similar way. “If I be lifted up,” he said, “I will draw all men unto me” (John 12:32). At his crucifixion, he was literally suspended against the backdrop of the sky and of a world beyond this world. Admittedly, the cross may have been rooted in the earth, but it also extended into the heavens in ways that we cannot fully understand—

And without controversy great is the mystery of godliness: God was manifest in the flesh, justified in the Spirit, seen of angels, preached unto the Gentiles, believed on in the world, received up into glory —1 Timothy 3:16

The notion of priest as a bridge-builder between God and man is certainly accurate enough and easy for the mind to grasp. God, after all, is above, and we like sheep have all gone astray—

Surely he hath borne our griefs, and carried our sorrows; he was bruised for our iniquities: the chastisement of our peace was upon him; and with his stripes we are healed, and the Lord hath laid on him the iniquity of us all —Isaiah 53: 4-6

The Christ opened what had been closed to us, and as priest, he offered on our behalf, what no priest before him or since could have ever offered. He offered himself as the Lamb of God. His death spanned the chasm between man and God. Because of him, we have a bridge into heaven itself.

There is more, though. For Christ, as priest, offers to God and to us an understanding of what it means to be frail and weak in the flesh—

For we have not an high priest which cannot be touched with the feeling of our infirmities; but was in all points tempted like as we are, yet without sin —Hebrews 4:14

We have a bridge to God built by one who was once man himself. This is the supreme story of the gospel in that God so loved the world that he gave his only begotten son. There is no reason for us to be ashamed to approach God because we have failed. We have a high priest who understands our frailties. There is now a bridge. 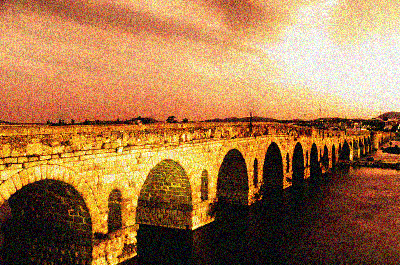 The man who thinks he is alone and that no one understands needs to look up toward heaven and receive from God the hand that is extended to every man and can make every broken life whole again. There is no need for you to wallow in the dirt of a life gone wrong, of a past of what could have been but never will be. Christ has come! He has risen, and he is priest.

If any man be in Christ, he is a new creature: old things are passed away; behold, all things are become new —2 Corinthians 5:17

Why do you live as you do when you do not have to?