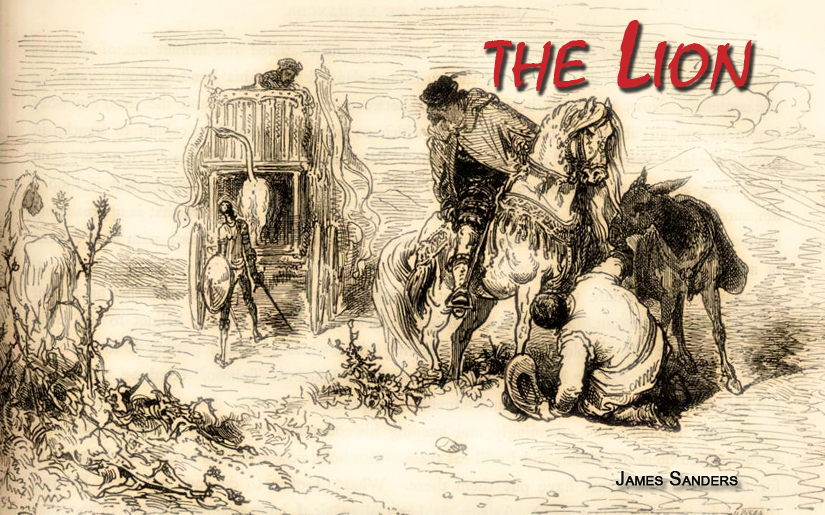 The Lion of the tribe of Judah

“I have come,” said a deep voice behind them.
They turned and saw the Lion himself—C. S, Lewis

WITHOUT question, the scene depicting Don Quixote as challenging a lion is both memorable and comical. Indeed, in this singular adventure, Don Quixote commands others to open the cage of a lion in order that as knight-errant, he might challenge the ferocity and bravery of the beast. At least, that is how Don Quixote sees himself in this unlikely setting.

Others in the scene, however, ascribed to a very different view.  In fact, the driver of the cart understandably hesitated at the demand that the cart be stopped and the cage opened.  There is an even greater danger than the lions.  The cart carries a royal flag, indicating that what is within is the property of the king. The lions are a gift to the king.  Yet, the clear danger of confronting the king seemingly is ignored, or at least, placed far into the background of the discussion.  The immediate threats are the lions which are about to be unleashed.

“The lions are large?’ asks Don Quixote, apparently in a determined show of resolve and foolish intention.   Sancho Panza. though,  pleads in tears in an attempt to counter the foolishness of Don Quixote— “These are real lions and nothing like windmills.”  Don Quixote  stubbornly remains unpersuaded from his appointed task.  He is determined to challenge the king of beasts in a mock duel.

The owner of the cart quickly removes his burros to a safe distance while Sancho Panza also removes himself out of the immediate reach of any lion as well as removing himself far away from the almost certain death of Don Quixote. Only the lion keeper remains nearby.  He must open the cage.  He, too, tries in vain to dissuade Don Quixote, but at last, succumbs to the persistent demands and threats from Don Quixote. The lion, however, remains oblivious and disinterested during the entire scene—

The keeper now opened the first cage. The first thing the recumbent animal did was to run around, put out a claw, and stretch himself all over. Then he opened his mouth and yawned very slowly. But Don Quixote merely stared at him attentively, waiting for him to descend from the cart.

The lion, however, proved to be courteous rather than arrogant, and after having gazed first in one direction and then in another, he turned his back and presented his hind parts to Don Quixote and then very calmly and peaceable laid down and stretched himself out once more in the cage —book 2, chapter xviii

Don Quixote next commanded the lion keeper to poke the animal with a stick so as to goad the beast into fighting. The keeper refused, saying that doing so would only make the lion attack him, not Don Quixote.  This reasoning seems to placate the determined Don Quixote and the adventure ends, much to the relief of everyone involved, and perhaps, the lion as well. 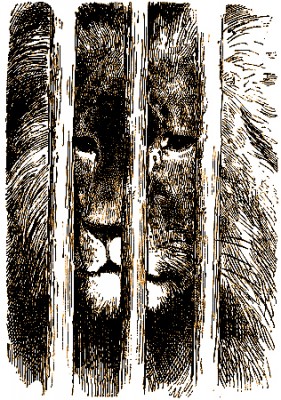 A lion, of course, is not a beast to be confronted even with a stick. Samson had the strength from God to tear a lion apart, but such physical prowess is not something God has granted us. The lion is formidable, stately, and magnificent. His very movements suggest both power and dignity. Indeed, through the centuries, the lion has been regarded as the very symbol of royalty, of strength, of elegance, of power.  The ancient Assyrians even depicted the lion as a gryphon with eagle wings and a human head. Such images were called lamassu and were symbols of the might and ferocity of the Assyrian Empire. The palace of Ashurnasirpal II was guarded at its entrance with a pair of large stone lamassu.  A portion of the inscription on the monument included these words—

Beasts of the mountains and the seas, which I had fashioned out of white limestone and alabaster, I had set up in its gates. I made it [the palace] fittingly imposing. 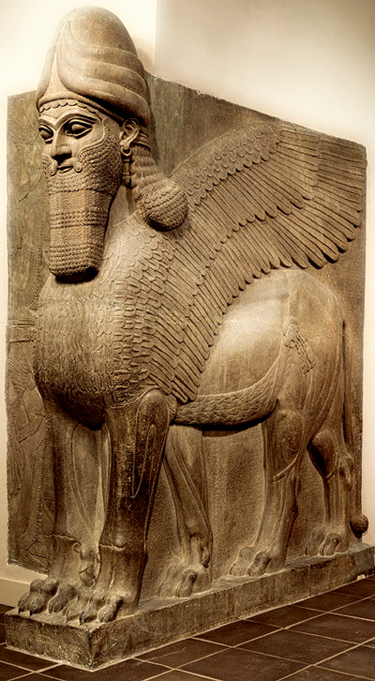 Certainly, the image of an Assyrian lamassu is an image of stateliness as well as brute ruthlessness. In fact, in Sacred Scripture Amos tells of the coming fall of Samaria at the very hands of the Assyrians—

Hear this word, ye kine of Bashan, that are in the mountain of Samaria, which oppress the poor, which crush the needy, which say to their masters, Bring, and let us drink. The Lord GOD hath sworn by his holiness, that, lo, the days shall come upon you, that he will take you away with hooks, and your posterity with fishhooks.

Therefore thus will I do unto thee, O Israel: and because I will do this unto thee, prepare to meet thy God, O Israel —Amos 4:1, 2, 12

The Assyrian monarch Shalmaneser came just as the Lord had said he would. The Assyrians completely destroyed Samaria and deported the population; the siege lasting some three years. The Assyrians were noted for their brutality and that brutality fell full force like the violent and unrestrained attack of a lion: “The LORD removed Israel out of his sight, as he had said by all his servants the prophets” (2 Kings 17:23). Unbelievable cruelty and force had been unleashed.  The people were literally taken away with fish hooks in their mouths.  Others were impaled on upright stakes outside the fallen city, with bodies on top of bodies.  The scene was one of complete and utter destruction.  Carnage and corpses lay everywhere.

Similar language warns us about our confrontation against Satan—

Be sober, be vigilant; because your adversary the devil, as a roaring lion, walketh about, seeking whom he may devour —1 Peter 5:8

No man is ever a match for Satan whether the attack comes as envy, or drug-abuse, or gambling, or lust. The story is always the same, and the end always cruel and violent. It is better to put our trust in the Lion of Judah than to trust the lion of hell.  Unlike the lion in Don Quixote; the lion of hell does not sleep nor yawn from sleep.  The devil never sleeps.

Every lion should be feared. At times, though, such fear is far worse than what we should allow. Don Quixote may have remained fearless, but we can paralyze ourselves even when no lion is present.  The idle man, for instance,  refuses to work  simply because he might be killed by a lion in the street.  Such a man often cries that others are against him and that he cannot possibly do better—

The slothful man saith, There is a lion without, I shall be slain in the streets —Proverbs 22:13

His claim of a lion in the street, of course, is a ruse, an excuse for his own laziness and lack of character. There may be danger, but there certainly is no lion. The reason the lazy man is lazy is not because of some force beyond himself. His cry of lion in the street may be humorous, but his life is indeed pathetic.  He could do better, but he does not, all the while blaming others for the direction his life has taken him.

Simply put: he is afraid of fear.  He cannot move because of that fear. We have all seen people like this. Life for them is so helpless that the government must feed them. Others are in control of their life, and they are but victims, entrapped by other people who do not even know them. Their life is hopeless because they are afraid to do anything else. A lion is in the street!  Such people need more of Don Quixote and less of any government fostering a sense of dependence and entitlement.  My problems are not because of you, and no government is the solution.  The change needs to come from within, not from without.

Even on a lesser scale, we sometimes find ourselves acting as if there were lions at our very door, waiting for us to open that door and venture forth. A man wants to learn to sail, but he cannot because his life is too hard. Another man wants to learn to play the guitar, but that is something far beyond whatever he might do. So, he does nothing.  Another man thinks of going to college, but he is too fearful even to try. A young man finds himself desperately in love with a woman, but he is too afraid to speak to her. She ends up marrying someone else. Many people believe that they cannot do better because of a lion in the street. The fact is, though, they could do better, much better.  They live a life of misery and shame.  The fact is we need to change our perspective.  The solution is not more money any more than the solution is more government.

A man does not have to be wealthy to enjoy life, or to smile.  Nor is a man destined by God to allow the burdens of life to get him down. A man may face struggles, but the ultimate outcome is in his own making.  God is not at fault for how we face the lion of our problems.  In fact, the struggles we face in life are some of our best moments in life. The simple things in life should never be discarded or disdained.   We do not need more money when character within is what is missing.  A plate of good beans is one of the best meals we can ever eat. Nothing can compare to the love of a good woman who is our wife. There is no greater blessing than our children. There is no wealth that can buy life or love.

We sometimes miss out on the life God has given us because of our fear or our neglect, either imaginary or real.  Consider the reason some people never become a Christian.  The lion in the street makes them fearful.  Their family may not approve, or their friends may not approve, so they remain where they are and wallow in a wasted life and a lost soul.  That is the greatest loss of all. Agrippa was almost persuaded, but his almost never changed into the now and the immediate. Paul preached, fervently urging him to change his life, but the lion in the street kept him unmoved and unpersuaded—

King Agrippa, believest thou the prophets? I know that thou believest —Acts 26:27