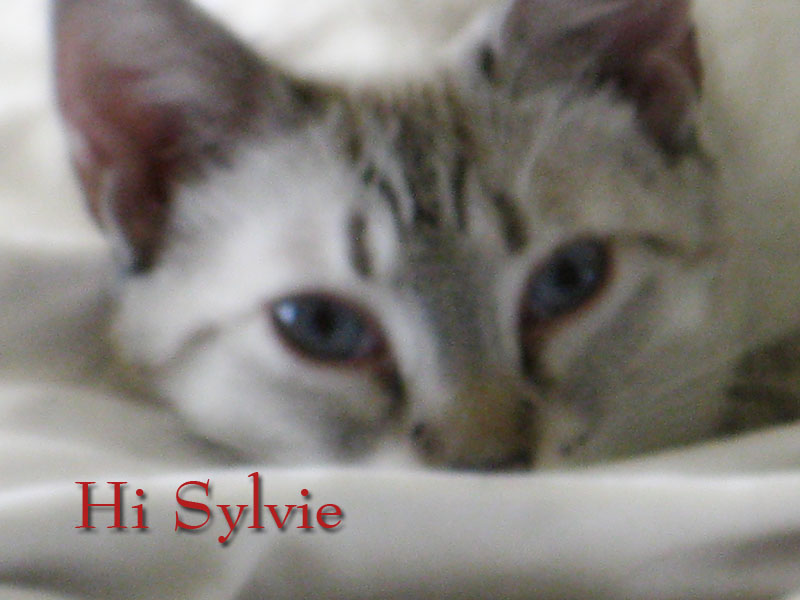 There are two means of refuge from the misery of life:

“And the poor man had nothing, save one little ewe lamb, which he had bought and nourished up:
and it grew up together with him, and with his children; it did eat of his own meat, and drank of his own cup,
and lay in his bosom, and was unto him as a daughter”—2 Samuel 12:3

SYLVIE was the name we gave her; at least, that was what Miss Pat called her. She named the cat Sylvestra, but we never called her that. Somehow, Sylvie just seemed a better and more apt description.

She was little more than a kitten the first time I saw her. She approached me with the plaintive cry of a hungry cat, a cat someone had thoughtlessly abandoned. I gave her milk, never thinking that I would see her again, but I did. After all, I knew nothing about cats. For me, a cat was an animal that other people owned. Inexplicably, little girls seemed especially attracted to small kittens. At times, you might even see a little girl dress her kitten as she might a doll, the cat’s face framed by a bonnet, the arms and legs dangling out of a dress, or small sweater. Like Montaigne, I could not tell who enjoyed the make-believe game more, whether the little girl or the small kitten. For me, however, a cat was a strange and distant animal, fiercely independent, disdainful, reticent, mysterious like the women who love them. I had always found dogs much more gregarious and lovable.
I was wrong.

Sylvie eventually discovered how to enter our house through a small doggie door, much, I might add, to the consternation and excitement of our dogs and my wife. I promptly placed the cat outside, and eventually the dogs stopped barking. Whatever the crisis had been, the crisis had passed without any noticeable fatalities. Even so, Sylvie did return and decided on her own to adopt our house as hers until at last she had made her way into the windmills of my heart. 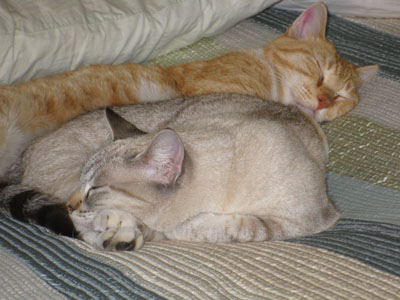 For some reason, even though she loved us both, Sylvie came to be my cat. Maybe it was because of the food she ate out of my own hand when she was very ill, or the way I carried her about on a blanket when she could not walk. We thought she would die, but she did not. Little did we know at the time that she was suffering from the early stages of leukemia. A year later, the disease once again wrecked havoc on her fragile body, but this time the disease killed her. She died at home, in the house she had adopted.

As I think of her now, I remember how malnourished she looked the first time she came up to me. Her ribs showed through her skin, but I fed her milk. Later, after she had become our cat, she fed me with a full devotion and inexplicable love. She was the alarm clock, waking me up every morning lest I be late. She swished her tail, and placed her paws gently on my chest.

When I showered, she sat outside the door, crying in a voice as to warn me of the dangers of water. At times, she would lick the wetness from my hand. In her mind, she probably thought she was grooming me, and maybe even protecting me. I will not hear that cry again, nor see the swish of her tail. Wherever I went, she went. She went with me when I took the garbage outside; she sat near when I practiced classical guitar; she greeted me when I came home from work. Every room I entered, she entered. When I used the computer, she curled her body at my feet. When I read a book, she lay on my lap, or on a nearby chair, perched high so she could see me in the face. She was my cat. 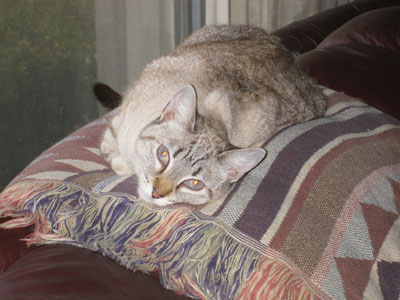 As I reflect on her life, I find myself compelled to think about God, and about these small creatures God has made and placed into our life. There is a bond between us and them, of course. The ox that falls into the ditch, argued the Lord, could be taken out of the ditch even though it meant working on the Sabbath. The enemies of Christ understood the compelling force of the illustration. Yet, beyond the notion of Sabbath and the misinterpretation the religious enemies of Christ had made about Sabbath observance, emerges another dimension, a point subtle and poignant. God placed Adam over the animals, and such a commandment predates the commandment to remember the Sabbath. If our ox falls, we need to rescue him.

Perhaps, such is why God consistently forbids cruelty toward an animal. For instance, a young goat must not be boiled in its mother’s milk: “Thou shalt not seethe a kid in his mother’s milk” (Exodus 34:26). To do so would be cruel and ungodly. The same reasoning would apply to yoking an ox with a donkey: “Thou shalt not plow with an ox and an ass together” (Deuteronomy 22:10). The unequal strength and temperament would have been inhumane. The donkey does not have the strength of an ox, and the ox does not have the agility of the donkey. Even when the ox worked alone, the owner must not muzzle the ox to prevent the animal from eating the grain as he worked the field: “Thou shalt not muzzle the ox when he treadeth out the corn” (Deuteronomy 25:4). This principle is cited in the New Testament with Holy Scripture adding a rhetorical question: “Doth God take care for oxen?” (1 Corinthians 9:9). Clearly, the Lord is concerned about how we oversee what he has made. When I mistreat an animal, I am striking out against God.  I am disobeying a commandment that is as ancient as Eden.

Of course, the animal is not sacred in the sense of a Hindu, refusing to eat a cow because the cow is somehow venerated. God does not require us to become vegetarians. That is not the idea. Indeed, to worship a cow is an affront to God. It is, in fact, idolatry. A man might as well worship an image of a golden calf. The animal is a blessing to us, and that is what God wants us to understand.

Sometimes that blessing comes as food, or as helper in work, but at other times, that blessing comes as a devoted bond between us and something God has made. The love that Sylvie brought to my life was like that. Admittedly, she was not human any more that I am a cat. Yet, God placed within each of our hearts, both hers and mine, the ability to love, and to be loved. Someone has well said that animals can speak with their eyes, laugh with their tails, and love us with their whole hearts. Sylvie did all of that and more.

The joy Sylvie brought to our family is something I really cannot describe. The pain we felt at her death is something equally beyond words. And yet, she was a blessing sent from God. Never in my life had I bonded so deeply, and perhaps, such a blessing will never come again. Yet, it came once in my life. Some people never experience that blessing in life ever. I never again will see the swish of her tail, or hear her searching cry. That music and those moments are gone. Tonight is a hurt within me, and I cannot play the guitar. I tried, but sorrow got in the way. Sylvie loved the sound of E minor and arpeggio patterns. My fingers pluck awkwardly at the strings, but the music stays silent. 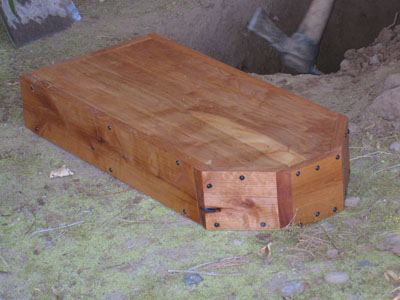 I built her a box and laid her gently into the ground.

All of this makes me think— if a small animal from God can love us so deeply, then the love of God for each of us must be far beyond anything we can ever imagine. Certainly, if I cannot understand the heart of a cat, I cannot understand the heart of God. The tragedy is that some people never pause long enough in life to know the love of an animal God has sent their way. A greater tragedy, though, is when a man passes through life and never stops long enough to know the love of God. Some of us never live.