To Dream the Impossible Dream

My soul is weary of my life,
I will speak in the bitterness of my soul— Job 10:1

Of making many books there is no end; and much study is a weariness of the flesh. —Ecclesiastes 12:12

Simply put: life is inscrutable and beyond us. We may think we can think through our problem but we really cannot. No book, no psychologist, no endeavor has the answer. We are at a loss, and even worse, we know that we are at a loss.

Or, to put it in the words of Ecclesiastes—

A physician once pleaded in tears, ‘Is this all there is to life? Is this all there is?” He knew there was something else, but he could not identify what that something else may have been. He felt bewildered, frustrated beyond words. He kept asking the same question, a question that no one could answer. A crisis in his life had brought him to utter despair and left him with no answers. His life was in upheaval. 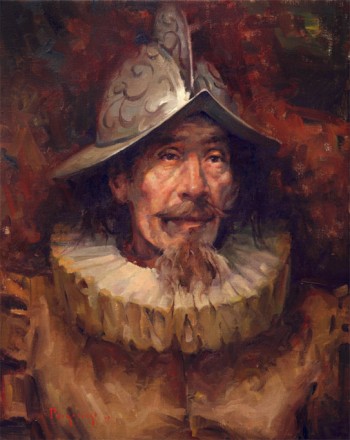 Like Don Quixote, we give ourselves to a cause only to end up in madness. The cause itself may be good, even noble, but fighting a windmill does not seem to get us very far. Don Quixote believed in a chivalric code, largely because of what he had read in books. He became obsessed, buying books whenever he could, even selling tillable land so he could purchase more books, carrying home as many as he could in his arms. Whenever there was a passage he could not understand, he would lay awake at night, mulling over a pointless sentence in one of his cherished books:

The reason of the unreason that affects my reason in such a manner weakens my reason that I with reason lament me of your comeliness.  —chapter 1

He could make no sense out of the nonsense, but he knew that words must proffer meaning. Ultimately, he decides to put the words that he cannot understand into practice by sallying forth as a knight-errant. He will rescue the world and make right every wrong. 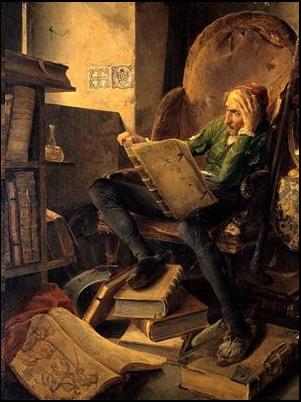 He puts together armor, or at least, what seems to him the kind of armor a knight-errant should wear upon embarking on a splendid adventure. Since his helmet has no visor, Don Quixote cuts a visor out of cardboard. Apparently, though he had some doubts about the suitability of the visor and decides to put his armor to the test by hacking at everything with a sword— he drew his sword and give it a couple of thrusts, he succeeded only in undoing a whole week’s labor. This failure momentarily brings him to some semblance of reality for he fashions another visor, but this time, he forgoes any battle testing of his new armor. Cervantes clearly intends for such a scene to be comical, but when we read Cervantes in our later years, we find a far deeper meaning. The comical Quixote has become the disillusioned us.

Literary critics such as Aubrey F. G. Bell have said that every man should read this book three times in life: once in youth, once in middle age and finally, in the last years of life. Even Unamuno, who thought that he could have done a better job of explaining Quixote than Cervantes, was forced to regard the literary character as deeply insightful and even philosophical.

A man can pursue what is noble and good, can give himself to study and to books, only to discover in his last years, a sense of utter futility. What happened to Don Quixote was that there was no balance to his high idealism. Reality is simply not in a book, not even in the pursuit of making every wrong into a right. That simply cannot be done.

We put on the whole armor of God and we go forth to fight the enemy, just as we are told—

Wherefore take unto you the whole armour of God, that ye may be able to withstand in the evil day, and having done all, to stand —Ephesians 6:13

And then, it happens; some experience shatters our world— a child may die, a son or daughter for whom we have lived our life turns out wrong, leaving church, mother, dad, and God behind. Or, it may be that the church around which we had built our life suddenly ruptures in corruption. A minister runs off with someone’s wife, or a treasurer embezzles, or people we once admired become embittered, entangled in some petty quarrel, usual over power. We shake our head because our world is shaken.

Sometimes, though, it is not some tragic or earth-shattering event. Sometimes the disillusionment is much more gradual. We do what is right, but it does not seem to make any real difference. A preacher once snapped back at a family member: “I am OK; it’s just the rest of the people that are wrong. If they would just act right, we would not be having problems.” No man, of course, is right unless he is right with God. And we can never be right with God until we see the wrong within ourselves. The Pharisee within us may thank God for all the good we have done for God, but it is the publican who cries,  Lord, be merciful to me a sinner (Luke 18:13).

It is precisely here, in this devoted quest for the noble and good, that the danger lies. The paradox is that the harder we try, the worse everything becomes.

It is a sobering thought. We, who have lost ourselves in the battle for right, can lose both self and soul because we wanted to do right, desperately wanted to do right. Idealism, after all, must have some ideal, something above us and far beyond us. Yet, we are warned about our frailties—

There is a sense in which we can become obsessive in life, especially in our  attempts to be right ourselves and to make the world right as well. Yet, we really cannot do either. We are righteous because we are forgiven. As for the world, we cannot count what is not there,  nor we can we even begin to rectify what has gone wrong. Consider for a moment, our own life. We cannot take back a cutting remark we should have never said. Once we have spoken something, we cannot erase the harm even though the words themselves are invisible.  Words may be temporary, but the effects are permanent— every idle word that men shall speak, they shall give account thereof in the day of judgment (Matthew 12:36).   If all wrongs were as simple as stealing, everything would be far less complicated and easier to correct.  After all, we can return stolen money but when we steal another man’s wife in adultery, that which is crooked cannot be made straight (Ecclesiastes 1:15). 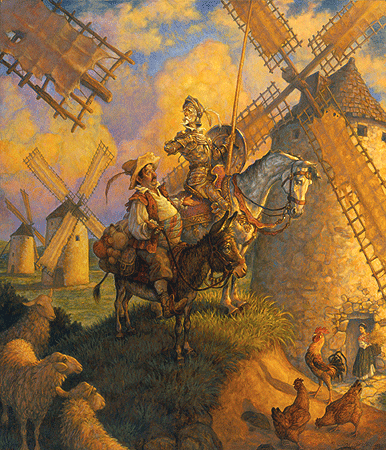 Money can be counted, but not so with lives. We cannot count what is not there. We cannot make what ought to be into what should never have been. We cannot make straight what is crooked. Certainly, we can see the wrong, but we cannot undo the wrong, or make the wrong into right. The wheat and the tares must grow together until the harvest of God. In fact, to do so before then could result in greater irreparable harm: lest while ye gather up the tares, ye root up also the wheat with them (Matthew 13:29).

Whether we understand it or not, the complete eradication of evil is beyond us. Judgment belongs to God, not us:

We may want things to be right. We may want evil to be punished, but neither is going to happen in the way we think it should happen. What we need to remember is that God will handle every wrong. For us to think otherwise is delusional and even dangerous. We can commit our lives to God, only to be committed to near insanity in the end. We grow frustrated and become unbalanced, flaying our words and life about us. Our thinking becomes twisted, distorted; our life, utterly cynical. Just as too much salt ruins the meal, too much righteousness ruins the life—be not righteous over much.

A man once entered the ministry of God with high hopes.  He wanted his life to be different than what he had experienced in his boyhood.  Now, however, in his later years, his preaching became more of angry outbursts with loud, ugly tones. Like Don Quixote, he ventured forth on a noble cause, but unlike Don Quixote, he could never balance idealism with a sense of pragmatism.  He saw the wrong in others and he imagined he knew how to correct every wrong.  He was blind.  He had given his life to doing right only to become disillusioned with himself, with the church, and with the world.  The longer he lived, the more embittered he became.

The irony is that his obsessive righteousness left the evil in the world untouched but damaged him in ways he does not even understand. No one ever shunned Don Quixote because of his idealism, but people came to shun this man.  He preached, but people stopped listening to him.  It would have been better if he had fought with windmills and had been knocked off his horse. We have all seen men like this. We want to think that perhaps it is not too late, but such a man has become so fixated on making the crooked straight that he himself has become as distorted as what he condemns. Others see what he cannot.

Righteousness is right, but an imbalance in how we see ourselves and the world is disastrous. Building castles in the air, says Thoreau, is where castles should be built. Now put foundations under them.  We need both the high ideals of Don Quixote and the common sense of Sancho Panza.  We need the castles in the air and we need the ground under our feet.  We need the quest for the noble life, but we must not take ourselves too seriously. We have an allotted role in life, but our role is not the role of God.  God will take care of every wrong, and he will do so in his own way and in his own time.  In the meantime, let us remember these words—

He hath shewed thee, O man, what is good; and what doth the Lord require of thee, but to do justly, and to love mercy, and to walk humbly with thy God? —Micah 6:8