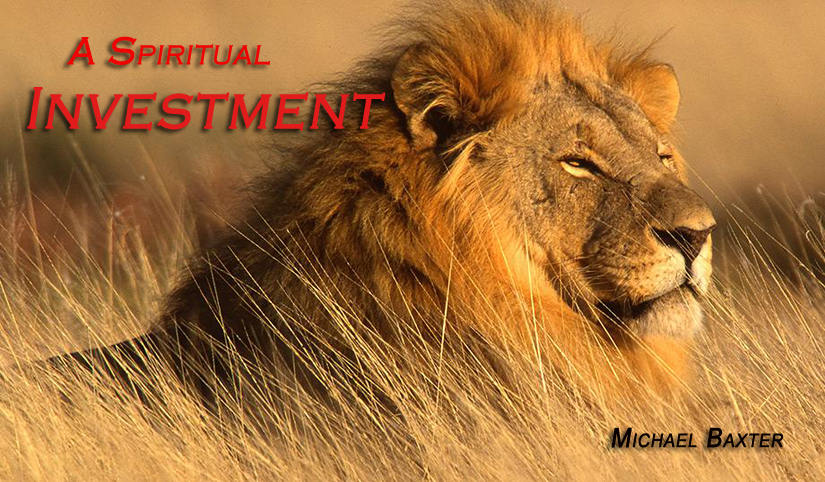 Goodness is the only investment that never fails. —Thoreau

EVERY WEEK we take up a monetary collection, as we’ve been instructed. Call it an investment. We are investing in our future when we contribute to the work of the Lord. How so? We give as we’ve been prospered by the Lord, so that our fellow brothers may prosper in the Lord.

Now concerning the collection for the saints, as I have given orders to the churches of Galatia, so you must do also: On the first day of the week let each one of you lay something aside, storing up as he may prosper, that there be no collections when I come. —I Corinthians 16:1, 2

Do you know who the world’s second largest investor is, and what commodity he trades? The investor is Satan and his commodity is a diverse and comprehensive portfolio of sin. He runs a 24-7, year-round operation with dedicated agents, a successful track record, and no plans to stop until he’s forced into retirement. He uses a tried and true method called deceit.

You’ve probably heard about his latest investments, one of which is making headlines. It’s the story of a dentist and a lion, and it’s sparked international outrage. In short, an American dentist illegally shot a beloved and protected lion, from an African wildlife preserve. This event has triggered an outpouring of indignation, fury, and viciousness around the world. There are endless discussions about morals and ethics, interwoven with insults and threats against the hunter, resulting in widespread and unified rage. Does God expect good stewardship with His creation? Yes. Does He expect obedience to the laws? Of course He does. Is the life of this animal more valuable than that of a human? According to the world it is.

One of Satan’s less reported investment is in a group called Planned Parenthood. Although less reported, it is by no means less successful. The issue involves abortion, but it doesn’t end there. This group is also dissecting, harvesting and selling parts of human babies. This evil is co-building a foundation with the previous evil, to reinforce the false belief that animal life is not only greater than human life, but that human life is not to be revered. This directly conflicts with God’s Word, as we were made in His image.

For You formed my inward parts; You covered me in my mother’s womb. I will praise You, for I am fearfully and wonderfully made; Marvelous are Your works, And that my soul knows very well. My frame was not hidden from You, When I was made in secret, And skillfully wrought in the lowest parts of the earth. Your eyes saw my substance, being yet unformed. And in Your book they all were written, The days fashioned for me, When as yet there were none of them. —Psalms 139:13-16

Once again the world has made a poor investment. Meanwhile, people are losing their very souls. Where’s the international outcry over that? You won’t find it on the front page or in the news. Why not? One simple reason; when you don’t invest in God, by default you invest in everything else. Consequently this strategy guarantees a loss.

We know who the second largest investor in the world is, so who’s the first? You already know Him. It’s our Lord. He gave His Son as an investment on our souls, as we read in John 3:16. It’s our turn to choose the right investment. What we give monetarily contributes to many good works, like spreading God’s Word to those who are looking to invest into their future.

Based a short talk on how and why to give to God, August 20, 2015.
Church of Christ, Valley Congregation (Phoenix, AZ).
Used here by kind permission.